What is the Minnesota Multiphasic Personality Inventory?

Home » What is the Minnesota Multiphasic Personality Inventory?

The MMPI service is currently unavailable at Tokyo Mental Health. Please visit our psychology testing page to learn more about other available options. 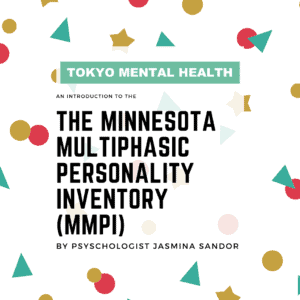 The Minnesota Multiphasic Personality Inventory (MMPI, or the MMPI-2) is the most widely used test for measuring personality psychopathology in the world. It was developed at the University of Minnesota in the early ’40s, and today’s version remains largely unchanged. The main goal in creating the Minnesota Multiphasic Personality Inventory was to distinguish people with mental health challenges from the general population and, at the time, there were no other tests that could reliably do so.

What is novel and interesting about the construction of the MMPI is that criterion keying was used for the first time. Criterion keying is a technique used for comparing two groups of people – the first group consists of members of the general population (or people without a relevant diagnosis), and the second group consisted of people whose diagnoses are already known. Subsequent analysis of the results sought differences in responses between the two groups to determine in which criteria they differed.

Over time, the Minnesota Multiphasic Personality Inventory has become not only the most commonly used psychodiagnostic tool for assessing personality in psychological practice, but also in scientific research. One of the important features of MMPI is the inclusion of validity scales, whose purpose is to discover the extent to which the questions were answered correctly. Validity scales indicate inconsistencies in responses and intentional exaggeration or reduction of symptoms, which makes faking the MMPI results extremely difficult.

The revised version of the MMPI, the MMPI-2, consists of 567 dichotomous questions, grouped into 9 validity scales, 10 clinical Scales, 28 Harris-Lingoes subscales, 3 Si subscales, 15 content scales, 27 content components scales, 20 supplemental scales, and 9 restructured clinical scales. In other words, the MMPI-2 is based on 567 yes / no answers to questions describing everyday life situations, which allow the scorer to detect the presence of  a range of mental health issues including mood disorders (eg. depression), psychosis (eg. schizophrenia) and obsessive thoughts (as seen in OCD), as well as personality traits such as psychopathy, and some less-often evaluated traits such as hostility, domination, or social responsibility. Since the MMPI gives a wide range of output, it provides the clinician with a good foundation for quality personality assessment. Check out this article if you’re interested to find out more about the MMPI-2, read this article.

Email us at [email protected] or visit our psychology testing page to learn more about the MMPI and other testing methods.

This website uses cookies to improve your experience while you navigate through the website. Out of these, the cookies that are categorized as necessary are stored on your browser as they are essential for the working of basic functionalities of the website. We also use third-party cookies that help us analyze and understand how you use this website. These cookies will be stored in your browser only with your consent. You also have the option to opt-out of these cookies. But opting out of some of these cookies may affect your browsing experience.
Necessary Always Enabled
Necessary cookies are absolutely essential for the website to function properly. These cookies ensure basic functionalities and security features of the website, anonymously.
Functional
Functional cookies help to perform certain functionalities like sharing the content of the website on social media platforms, collect feedbacks, and other third-party features.
Performance
Performance cookies are used to understand and analyze the key performance indexes of the website which helps in delivering a better user experience for the visitors.
Analytics
Analytical cookies are used to understand how visitors interact with the website. These cookies help provide information on metrics the number of visitors, bounce rate, traffic source, etc.
Advertisement
Advertisement cookies are used to provide visitors with relevant ads and marketing campaigns. These cookies track visitors across websites and collect information to provide customized ads.
Others
Other uncategorized cookies are those that are being analyzed and have not been classified into a category as yet.
SAVE & ACCEPT
What is TRICARE?

TRICARE is the health care program for uniformed service members, retirees, and their families around the world.