What is Binge-Eating Disorder?

Home » What is Binge-Eating Disorder?

What do you mean by binge-eating?

Binge-eating is defined as eating an amount of food that is in excess of the portion size that one might usually consume in a short period of time (e.g. within 2-hours). Continuing to snack throughout the day would not be considered binge-eating. Also, the type of food consumed does not affect whether it is considered a binge-eating episode but rather the amount of food consumed relative to the amount of time in which it was consumed.

This eating behaviour is usually accompanied by a feeling of being out of control – feeling like you cannot stop yourself from eating, or feeling like you have no control over how much you eat. You might eat faster than usual; eat until you feel uncomfortably full; eat even though you are not physically hungry; eat alone out of embarrassment or shame; feel disgusted, guilty or depressed after eating. But, for some individuals, binge-eating episodes might be planned and they might stock up on specific foods for this purpose – despite this sense of ‘planning’ the out of control feeling will still be present at the time of eating.

To meet diagnostic criteria for binge-eating disorder, as outlined in the DSM-V, binge-eating episodes need to occur at least once a week for a period of 3 months or more. Depending on how often these episodes occur within the week, severity is categorised from mild to extreme severity. However, if there are other behaviours alongside the binge-eating, such as purging, conditions such as bulimia nervosa or other eating disorders associated with restriction also need to be considered. 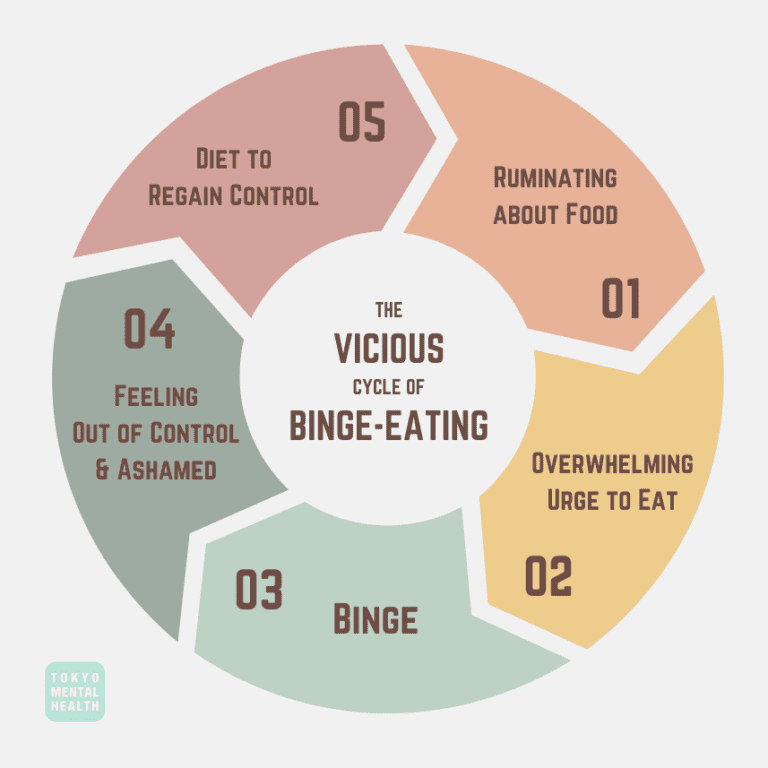 What are some common underlying causes?

Binge-eating disorder is more prevalent amongst individuals who are seeking weight loss treatment. This could indicate that there is a relationship between binge-eating and diet culture but it seems to be unclear which factors influence each other.

There is also a genetic component to binge-eating. If others in your family engage in this behaviour, there is an indication that there are underlying genetic factors. However, since environment does play a role in the onset of binge-eating, there are going to be individual differences despite a possible genetic influence.

With this in mind, it is important then to consider environmental factors such as:

What is the connection between binge-eating and other mental health problems?

In order to cope with our feelings, sometimes we might reach out for food to alter our mood. This might explain the link between other mental health disorders and binge-eating.

Additionally, referring back to the criteria for diagnosis, binge-eating disorder often comes with feelings of depression afterwards. That might suggest some kind of relationship between the feelings associated with other mental health disorders and binge-eating behaviours.

What can I do if I’m worried about binge-eating?

Talking to a mental health professional, such as one of our therapists at Tokyo Mental Health, or a physician would be the first port of call. If you see a doctor, they can check for potential physical causes and, if there are no underlying physical factors contributing to your behaviour, you can seek help from a therapist who has experience with eating disorders.

Below are some resources that you can access with more general information about eating disorders: